The 6 Most Iconic Signs in Dallas

You are here:
April 29, 2021Leave a commentSignageBy Kyle Walton 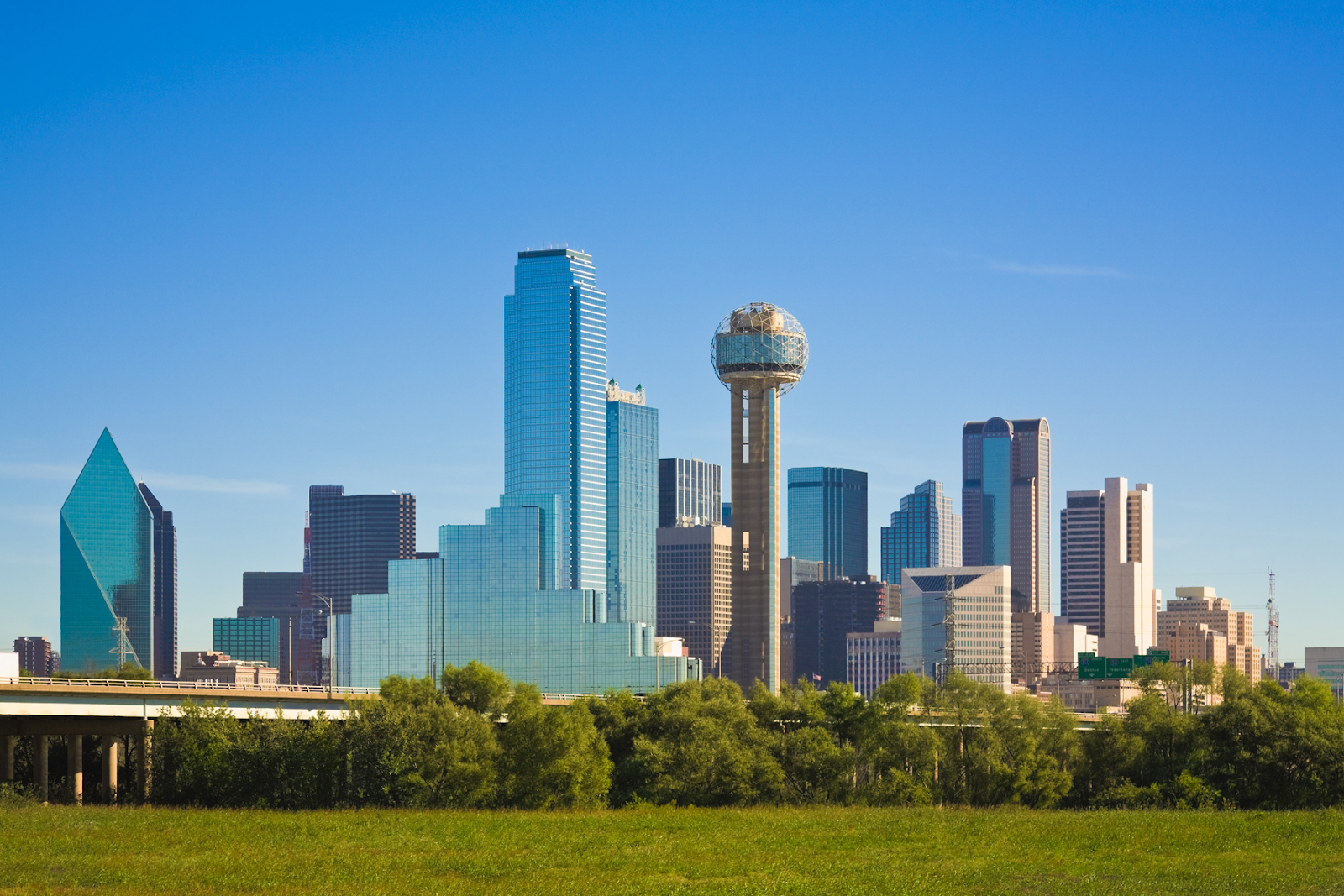 The city of Dallas, Texas is often overlooked for a variety of reasons, but as one of the most artistic and influential cities in the American Southwest, there’s no question it deserves more respect.

While the state of Texas is best known for its western traditionalism, red-blooded American ideals, and pride of statehood, many people often underestimate the Big D’s iconic artistic expressionism. Courtesy of Bartush Signs, here are the six most iconic displays in the city of Dallas, Texas. 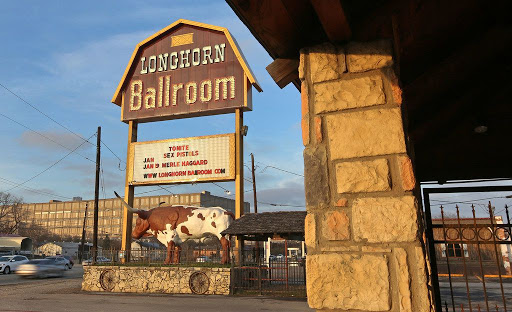 This bam-like dance hall, located on Cadiz at Industrial Boulevard, started out as “Bob Wills Ranch House. Early in its history, it served as the grand-daddy of west-em swing.

Later in life, the Longhorn Ballroom fell into the ownership of one Mr. Jack Ruby, the man who would eventually go on to kill President John F. Kennedy’s assassin, Lee Harvey Oswald.

Adorned with a fitting, barn-shaped lighted sign and featuring an extra-large Longhorn statue on a stone and wagon-wheel foundation, the Ballroom has played host to a number of legendary performers over the years, including Ray Charles, the Zydeco HiRollers, Red Foley, B.B. King, Willie Nelson, and even the Sex Pistols. 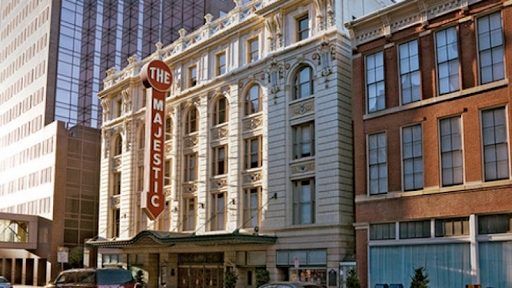 Located on the anchor of Elm Street’s Theater Row, The Majestic is an iconic and treasured reminder of the glory days of American cinema. The Majestic Theatre has hosted several major film premieres in its lifetime, including spectacles like King Kong and Bonnie and Clyde.

The movie palace is adorned by a simple-yet-elegant red and white vertical neon marquee bearing its name, which to this day still comes alive for touring Broadway shows and certain special events.

Constructed in 1920 as the flagship venue of Interstate Amusement Company (an early chain of vaudeville houses), The Majestic is now an official Dallas Landmark and is listed on the U.S. National Register of Historic Places. 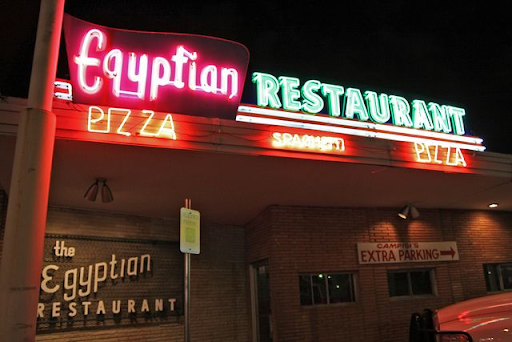 Believe it or not, “The Egyptian Restaurant” is actually a beloved pizza shrine, known as Campisi’s, which is located on Mockingbird Lane in Dallas. Interestingly, the establishment has never served Egyptian food and still doesn’t to this day.

So what’s the story behind this elaborate neon sign and window decal? Well, cash was scarce for the Campisi family when they first opened the pizza place in 1950, so they decided to keep the vibrant sign used by the building’s former owner.

Throughout its unique history, this restaurant has welcomed celebrities like Morgan Fairchild, who once named it as her “favorite restaurant in all the world,” and Mickey Mantle, who once had clam sauce spilled in his lap here. 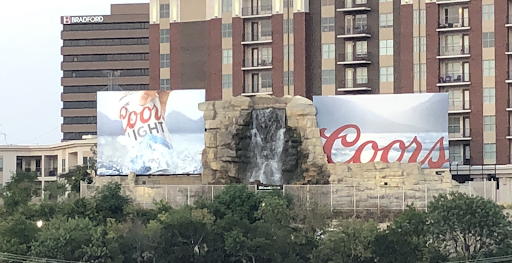 Perhaps the most unique thing about Dallas’s 35-foot billboard, overlooking Stemmons Freeway near the Oak Lawn and Tollway exits, is the fact that it proudly displays a working waterfall sculpture smack-dab in the middle.

When the spigot first opened 35 years ago, it was meant as an attention-grabbing advertising piece for Pear! Beer. Since then, it has advertised many alcohol brands, including Coors, Absolut, and others.

On the weekend of the Red River Showdown, an annual college football game played between the Texas Longhorns and their biggest rival, the Oklahoma Sooners, the waterfall has been known to gush red or orange. 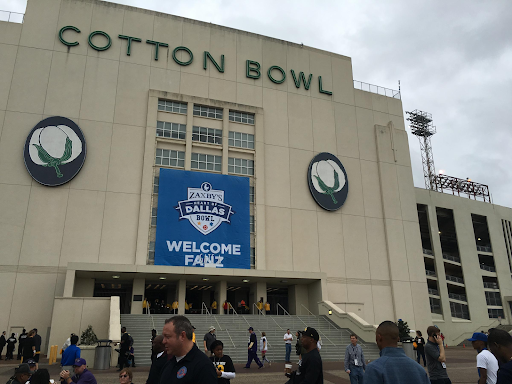 Speaking of college football, you can’t mention the city of Dallas without mentioning the Cotton Bowl. This prestigious stadium located at Fair Park is a stark reminder of the glory days of college football’s Southwest Conference.

The stadium’s display is simple and traditional, featuring bold, straight letters and cotton-seal insignia. Basically, the Cotton Bowl is a prime example of simplicity adding to heritage. 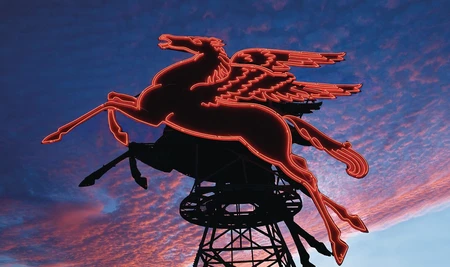 Though airline pilots are no longer able to use the brilliantly bright double-pegasus display that sits atop Dallas’s downtown Magnolia Building as a guiding light anymore (due to the vast spread of much larger skyscrapers in the area now obstructing its aerial view), the Pegasus is still the cream of the crop when it comes to iconic landmark signage.

First erected in 1934, this incredibly ambitious red neon display was designed to welcome delegates to an oil convention. It consists of two winged horses constructed eight feet apart. To this day, smart alecks in the rival Fort Worth area claim the sign is a result of Dallas trying to prove that it wasn’t a one-horse town.

The Pegasus served as the focal point of the Dallas skyline until it was usurped in 1978 by the construction of “The Ball,” a geodesic dome that currently adorns Reunion tower at the Hyatt.

Still, the flying red horse carries a long-time Dallas pedigree, and that alone earns it the number one spot on our list.