The Most Iconic Signs in Phoenix

You are here:
September 10, 2021Leave a commentFun, SignageBy Meghan McGowan 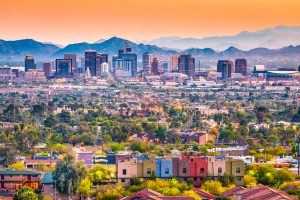 Phoenix is the capital of Arizona and one of the most populous cities in the United States. It’s a beautiful city with plenty to do for travelers and locals alike, from golfing to visiting museums to taking in the stunning desert vistas that the area has to offer. Phoenix is a hub for the unique blend of cultures that is the American southwest, and it can be seen everywhere you look in the city. Something that’s also worth taking notice of when you visit Phoenix are the signs around the city. The signage is as quirky and fun as the city itself, so while you’re there make sure to keep an eye out for these iconic signs!

The winter home of famed American architect Frank Llyod Wright is a very popular spot for visitors to Phoenix. Located in the foothills of the McDowell Mountains just outside the city, Taliesin West was declared a UNESCO World Heritage Site in 2019. The building was Wright’s way of escaping the cold winters that plagued his primary home in Wisconsin, and is a wonderful reflection of his architectural style, including plenty of clean horizontal lines and using materials that were locally sourced from the surrounding desert. The sign for Taliesin West also reflects this style with its clean geometric shapes; even the stone of the sign itself harmonizes perfectly with the desert flora around it. 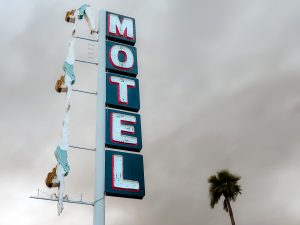 Just east of Phoenix is a local landmark and a monument to the neon signs of the past century– the Starlite Motel sign. It was first built in 1960 when the motel wanted a show-stopping sign to advertise the swimming pool they had just installed. In the years since, the swimming pool has been filled in, but the “Diving Lady” as she is called by the locals, has remained on her seventy-foot pole, taking her three part animated dive into blue neon water. The Diving Lady captivated people for decades until 2010, when a storm snapped the signpost. The damage was extensive, with almost all of the sign’s neon tubes shattered and much of the metal crumpled. However, the town of Mesa was not ready to let this wonderful snapshot of Americana head to the scrap heap, and a project began to restore the Diving Lady. The restoration was completed in 2013, and the Diving Lady is still standing today, one of the most iconic signs of the Phoenix area.

Located inside a refurbished gas station in the Melrose district is Copper Star Coffee, a trendy local café offering a variety of coffee drinks and treats. The huge neon coffee cup sign near the road ties perfectly into the old-fashioned gas station theme of the café and draws plenty of curious customers into the bustling shop, whether to the drive-through or to sit inside and appreciate some live music with their coffee. The sign is a popular background for Instagram photos, and is worth making a stop at on your trip to Phoenix! 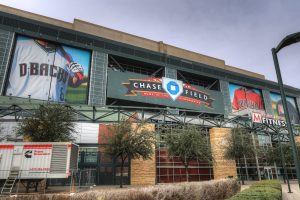 Any lover of baseball will know that Chase Field is an important stop on their visit to Phoenix. This ballpark was built in 1998, at the time called Bank One Ballpark, and was the first in the United States to have a retractable roof, a crucial feature to enable the stadium to be cooled for games played in Arizona’s intense summer heat. The design of the sign reflects the girders supporting that famous roof, and proclaims the field as the home of the Diamondbacks, who played the first official game there when the ballpark was opened.

Opened in 1947 and staying true to its roots ever since, the Bikini Lounge is a classic staple of the bar scene in Phoenix. Although this tiki bar can be considered a bit of a dive, its customers and staff are deeply loyal in their love of the establishment. You can’t miss the large lettering on the thatched style facade of the bar. This sign tells you from the outside exactly what you’ll find on the inside– a quirky tiki joint that has earned its reputation for unpretentious fun.

Phoenix is a city that offers a fantastic variety in its atmosphere, and this is especially easy to see when you take a look at the city’s vibrant and varied signage. They’re more than just emblems of businesses or locations– over the years they’ve become part of the culture of the city. The next time you’re in Arizona, don’t forget to take a look at these iconic signs in Phoenix!

Are you interested in commissioning an eye-catching sign for your business or organization? If so, Bartush Signs can help! We are the premier display signage company in Orwigsburg, PA. Contact us today to discuss your options!

Phoenix
About the author