You are here:
July 8, 2020Leave a commentFun, SignageBy Natalie Shaw 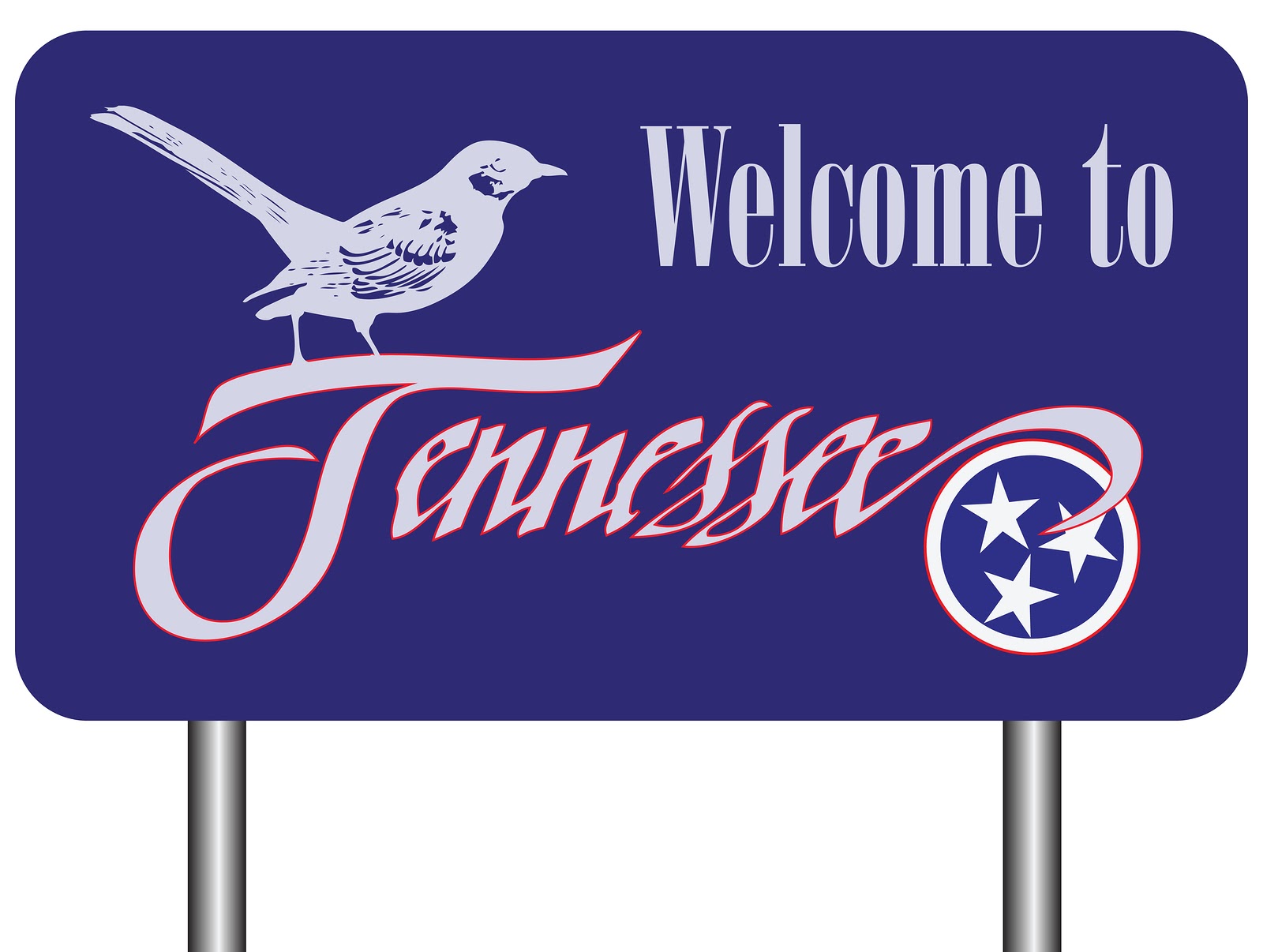 Traveling through Tennessee you’re sure to hear a catchy tune. While Nashville is the music capital of the world with a history rich in musical notes and the home of country music, Memphis is known worldwide as the home of the blues and birthplace of rock ‘n’ roll. Whether you’re visiting the beautiful state to catch a concert, see the musical halls of fame, or simply to get a dose of good southern hospitality, you’ll also want to keep your eyes peeled for these famous signs. 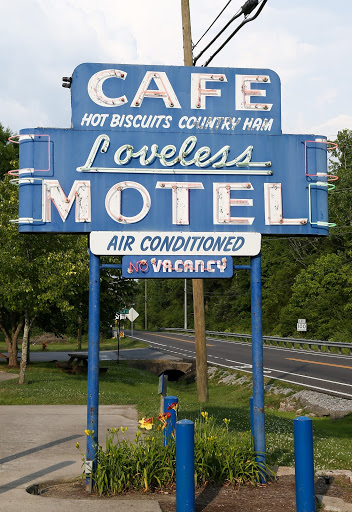 The Loveless Cafe Motel has been around for nearly 70 years now and has recently received a historical marker. The small cafe opened its doors in 1951. Beginning as a tiny shack on the side of highway 100, the Loveless Cafe Motel stood on the only road between Nashville and Memphis. Lon and Annie Loveless began serving hungry travelers on the side of the road in 1951 and eventually converted their 4-room home into the famous cafe and added the 14-room Loveless Motel, a smokehouse, and their iconic neon sign that still stands today. The food is so good, it’s been featured on the Today Show. Traveling from Nashville to Memphis, be sure to catch a glimpse of the sign, and if you’re hungry, you’ll want to stop for their 70-year old famous biscuits and chicken! 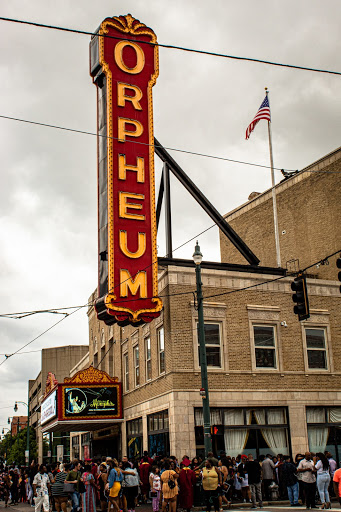 The Orpheum Theatre has a long history after fighting many uphill battles. Originally built in 1890 as the new Grand Opera House, it was considered the classiest theatre outside of New York City, and some of the best shows in the South were put on right at the corner of Main and Beale Street. By 1907, the Grand was officially known as the Orpheum after becoming part of the Orpheum Circuit of Vaudeville. By 1923, the Orpheum was destroyed by a fire, experiencing its first of many downs. The theatre was rebuilt in 1928 and it hosted a new era of performances. The likes of Louis Armstrong, Duke Ellington, and Eddie Cantor all performed there. However, the theatre was unable to survive the Great Depression and from 1940-1976 it served as a single movie theatre.

After being threatened with demolition, the Memphis Development Foundation purchased the building, renovated it, and renamed it the Orpheum in 1977. At this time, the Orpheum Theatre also became one of the first buildings in Memphis to be added to the National Register of Historic Places. Broadway shows and live performances returned to the stage for many years to come. Today, the Orpheum stands to help community and educational programs. The Orpheum sign erected above the building continues to stand tall and signal to many a rich piece of Memphis history. If you find yourself at the corner of Main and Beale street, be sure to check it out. 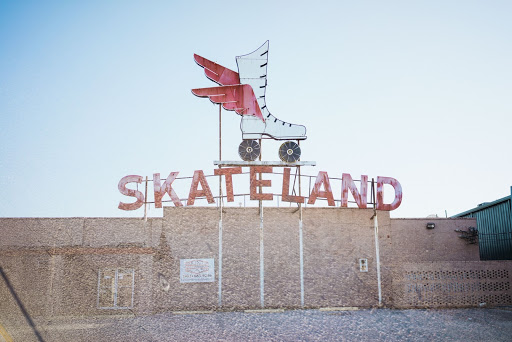 If you’re looking for a piece of American pop culture history, you’ll want to check out the Skateland sign in Memphis. Skateland first opened its doors in 1955. By 1963, the roller rink moved across the street and reinstalled its famous neon signs on the new building. The lettering of the sign is 32 feet in length and the skate above the letters stands at 13 feet tall! The neon wheels were also animated to appear as if they were spinning. Unfortunately, the roller rink closed in 2006 after a fire. A year later County Glass moved into the building and decided to keep the Skateland sign above the entrance. While the neon no longer works, the stature of the sign is still impressive and marks a time when roller rinks were the popular pastime for young Americans.

Home of the Blues Beale Street 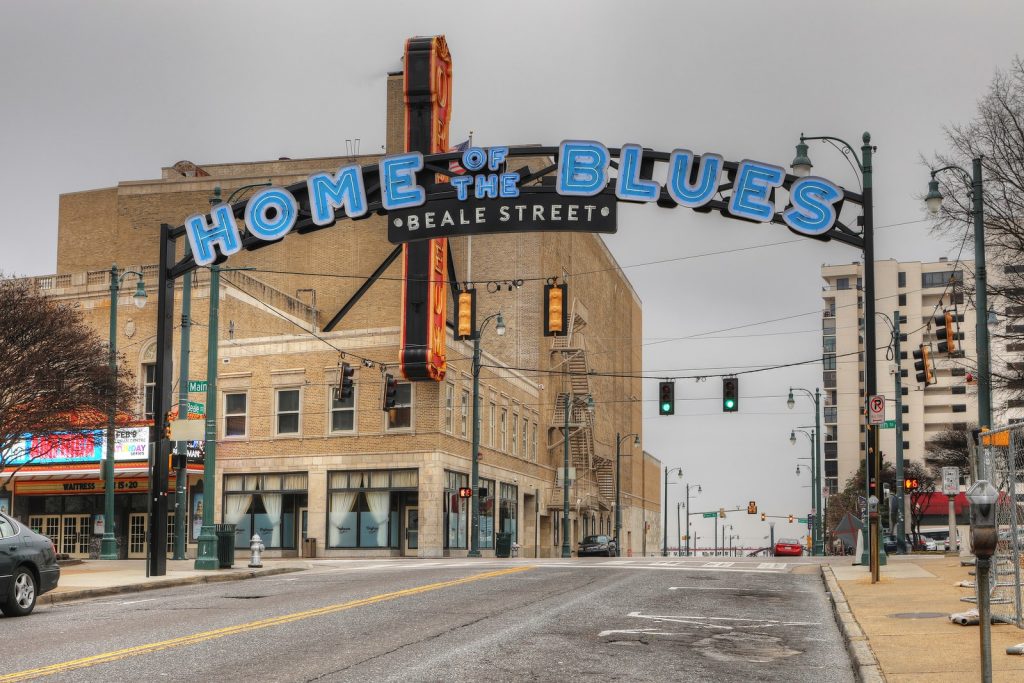 Whether you live in Memphis or come as a tourist, you’re bound to know when you make it to Beale Street with the big blue neon sign that arches over the street. This sign is a new addition to the Memphis sign collection, making its grand appearance in 2018. As a newcomer to the block, it has received mixed reviews. Some tourists and residents love the new sign and think it’s big, bold, blue lettering embody the city of Memphis perfectly. Others feel the sign is a tad unnecessary in its grandeur. If you find yourself in Memphis, you’ll have to decide for yourself where you stand on the Home of the Blues Beale Street sign.

You don’t need to hit a high note for your business to get noticed! If you’re looking to grab attention and bring in more customers, Bartush Signs is here to help! We offer a wide range of services from Neon and LED signs to free standing signs and specialty signs. Whether you’re a small business or part of a franchise, we can help with all of your signage needs!